Eeyore Husky is one of the characters on The Real Di'angelo and Friends. He is a possible relative of Di'angelo.

Eeyore Husky is a happy-go-lucky husky who is dressed as Eeyore from Winnie the Pooh. He tends to be a bit eccentric at times, at the most, believing that his costume is a part of him because "he was born with it". He tries his best to get along with Di'angelo, but doesn't do so well, with the latter being jealous of him. After many times of Di'angelo's schemes to get rid of Eeyore didn't work, he finally admits he was jealous, and after Eeyore explains how he wanted to be like Di'angelo, because everyone loves him and misses him when he's gone, he wanted that same attention, since he had nowhere to go and no one to love him before. Di'angelo, finally realizing how wrong he's been warms up to him and welcomes him in, like everyone else was doing. From there, Eeyore seemed to blend in, like he stated before.

Eeyore usually introduces himself as "Eeyore Husky", rather than just "Eeyore", which is probably him saying that "Eeyore Husky" is his full first name, rather than first and last. Some odd things about his costume is the fact it never gets dirty and if it were to get wet, all he has to do is shake himself off and he's completely dry. He and his costume also seem to have a physical bond, as when Di'angelo tries to take it off, he exclaims in pain, meaning he mostly likely actually has the costume bonded to him somehow. It's also probably why we never see him take it off. Another instance of his costume most likely being part of him is how in the Halloween special, he wears a costume OVER the Eeyore costume, to which Di'angelo finds odd (Ironic, huh?). In Wedding of the Century (or Something), he wears a tuxedo over the costume. However, this can still be him believing that the costume's part of him. But, it's something to think about. Despite being dressed as him, Eeyore Husky doesn't act like Eeyore in any way. He is considered to be extremely cute by the other characters.

Eeyore Husky has the normal appear of any husky in the series. He wears a bluish purple Eeyore costume, that covers every part of him, except his face (and possibly his tail). 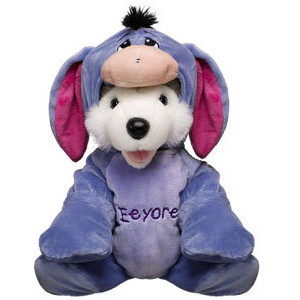 The gallery for Eeyore Husky is here.

Retrieved from "https://therealdiangeloandfriends.fandom.com/wiki/Eeyore_Husky?oldid=4077"
Community content is available under CC-BY-SA unless otherwise noted.